How do independent contractors protect their intellectual property?

Alcohol Abuse During the COVID-19 Pandemic

Adom-Otchere tells Domelevo not to overstep his bounds

The five-week suspension of Parliament will begin later, after MPs are expected to again reject government calls for a snap election.

Opposition MPs confirmed they would not back the push for a 15 October poll, insisting a law blocking a no-deal Brexit must be implemented first.

Ministers have called the law “lousy” and said they would “test to the limit” what it required of them.

Boris Johnson has been warned he could face legal action for flouting it.

At present, UK law states that the country will leave the EU on 31 October, regardless of whether a withdrawal deal has been agreed with Brussels or not.

But the new legislation, which was granted royal assent on Monday, changes that, and will force the PM to seek a delay to 31 January 2020 unless a deal – or a no-deal exit – is approved by MPs by 19 October.

BBC political editor Laura Kuenssberg said although No 10 insisted it was not looking to break the new law, efforts were under way to examine ways of getting around it.

Meanwhile, John Bercow has said he will stand down as Commons Speaker and MP at the next election, or on 31 October, whichever comes first, after 10 years in the role.

And ahead of the vote on an early general election, the prime minister suffered another defeat in the House of Commons.

MPs backed calls for the publication of government communications relating to the suspension of Parliament and the disclosure of all documents relating to Operation Yellowhammer, the government’s no-deal contingency plan, shared with ministers since 23 July.

The government lost by 311 votes to 302 although it is unclear whether ministers will comply with the requests.

Former Conservative Dominic Grieve, the newly independent MP who tabled the motion, told MPs it was “entirely reasonable” to ask for the disclosure “so the House can understand the risks involved and this can be communicated more widely to the public”.

Labour’s shadow Brexit secretary, Sir Keir Starmer, said there was a “basic lack of trust… between this House and the executive”.

“It’s blindingly obvious why we’re being closed down – to stop scrutiny and to prevent this House expressing a view on no deal,” he said.

“It is not just us that is being shut out, it is the people we represent.”

But minister Michael Gove, who is in charge of no-deal preparations, said he gave evidence to the EU select committee on Yellowhammer and he hoped “those assurances were sufficient”.

Attorney General Geoffrey Cox, meanwhile, questioned the legal right of the government to require employees – including the PM’s top aide Dominic Cummings – to open up their private email accounts and personal mobiles to scrutiny.

MPs are currently taking part in a second emergency debate on the rule of law and ministers’ obligation to uphold it.

Labour leader Jeremy Corbyn said the PM’s unwillingness to state categorically that he would comply with the Brexit extension legislation was dangerous and represented an “assault on the rule of law”.

The prorogation – or suspension – of Parliament until 14 October will begin at the end of Monday’s sitting.

It means MPs will not get another chance to vote for an early election until after then, meaning a poll would not be possible until late November at the earliest.

Mr Johnson argues he has been forced into seeking an election because the no-deal delay bill makes further negotiation with the EU pointless – but he needs the support of two-thirds of MPs to hold a snap poll.

Labour, the SNP, the Liberal Democrats, the Green Party, the Independent Group for Change and Plaid Cymru met on Monday morning and agreed not to back the motion for an election.

Mr Corbyn said MPs did not discuss the date of a poll, but the “obvious time” to decide that would be after the EU Council meeting in mid-October as “that’s when the British government will have to have made its application” for an extension.

Downing Street has accused Labour of denying the public the right to have a say and is arguing that Mr Corbyn should take the opportunity to seek his own mandate from the public to delay Brexit.

But the Labour leader said he thought it was “extraordinary” that the prime minister, having “lost every vote he has put to Parliament in the few days” tells the country he will defy Parliament.

“It’s disgraceful” – Labour’s Jeremy Corbyn accuses Boris Johnson of “running away from questions” by suspending Parliament from tonight until mid-Octoberhttp://bbc.in/34ALKUP 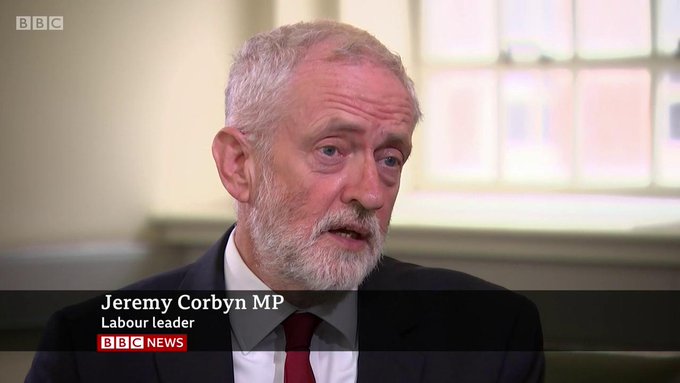 449 people are talking about this
Report

Elsewhere, one plan reportedly under discussion to get round the Brexit delay legislation is to ask a sympathetic EU member to veto an extension.

Another potential option would be to formally send the extension request mandated by the new law, but also send a second letter to the EU making it clear the UK government does not want one.

However, Lord Sumption, a former UK Supreme Court judge, said such a ploy would not be legal.

“To send the letter and then try and neutralise it seems to me to be plainly a breach of the act,” he told BBC Radio 4’s Today programme.

“We, in our, bones absolutely want a general election” says Labour’s Emily Thornberry, “there is a better way than this”

“We’re going for a general election, and we’re gonna mash you” she says to Conservative Steve Bakerhttp://bbc.in/2m74WIc  #politicslive #Brexit 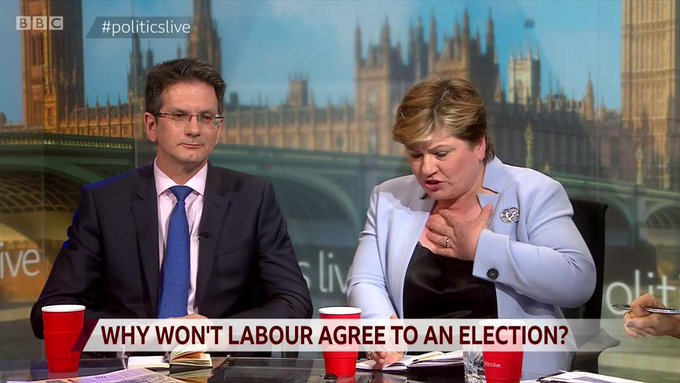 283 people are talking about this
Report

Earlier on Monday, Mr Johnson held talks with Leo Varadkar in Dublin – his first meeting with the Irish prime minister since he entered No 10.

The Irish border has proved a key sticking point in attempts to agree a Brexit deal between the UK and the EU.

Mr Johnson wants the controversial backstop – an insurance policy against a hard border on the island of Ireland – scrapped, because if applied, it would see the UK stay in a single customs territory with the EU and align with current and future EU competition rules.

Northern Ireland would also stay aligned to some rules of the EU single market.

These arrangements would apply unless and until both the EU and UK agreed they were no longer necessary.

The PM told a press conference he believed a deal could be done and an alternative to the backstop found.

Leaving without a deal – something he said again he was willing to do – “would be a failure of statecraft for which we will all be responsible”, Mr Johnson added.

Mr Varadkar said Ireland was “open to alternatives” to the backstop “but they must be realistic”, adding: “We haven’t received such proposals to date.”

He has said he is open to a solution involving a backstop which only applies to Northern Ireland, but Democratic Unionist Party MPs – Mr Johnson’s allies in Parliament – strongly oppose the idea.

Some critics of the prime minister – including Amber Rudd, who resigned as work and pensions secretary at the weekend – have questioned how serious he is about trying to reach a new deal with Brussels.

Ms Rudd told the BBC there was “very little evidence” the government would get a new deal, and when she asked for details of the efforts she received a “one-page summary”.