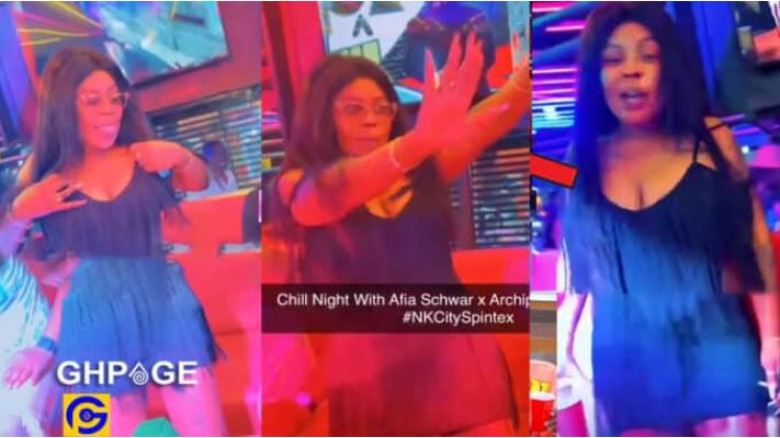 Controversial socialite Afia Schwarzenegger has been spotted in a new video partying like there’s no tomorrow despite claiming to be critically ill.

On many occasions, Afia Schwar has failed to show up in court with the excuse of being unwell, among others to avoid serving a 10-day jail term after being found guilty of contempt by a Tema High Court in December.

Despite claiming to be sick and immobile with a leg injury, she appeared in court on Tuesday clad in a black attire as she marked the first death anniversary of her late father.

Priot to coming to court, Afia Schwarzenegger began the day solemnly with a sad post indicating how she missed her dad.

She followed up with a few other photos showing she had visited her father’s grave to perform some private activities.

Just when her fans thought she was done for the day, Afia checked into Nhyiraba Kojo’s nightclub at Spintex later in the night to party hard with Archipalago they got wasted.

In a video that has surfaced on social media, a tipsy Afia is seen dancing and misbehaving at the club as the effect of the alcohol began setting in.

Watch the video below