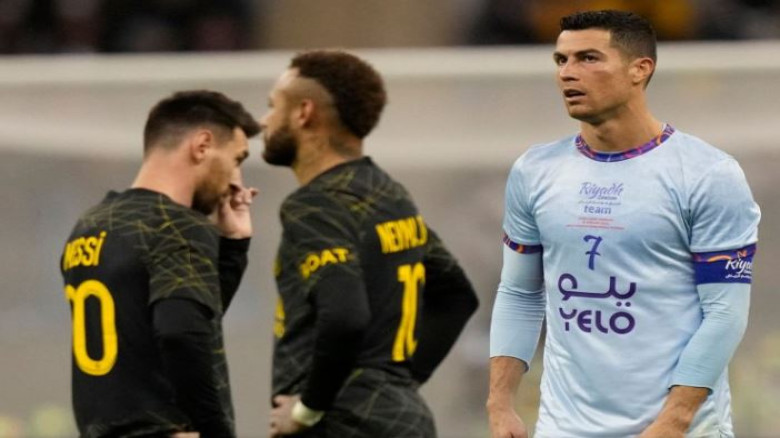 Ronaldo and Messi both score in Saudi exhibition

Cristiano Ronaldo scored twice in his first game in Saudi Arabia and Lionel Messi was also on the scoresheet as Paris St-Germain edged a Riyadh All-Star XI 5-4 in a thrilling contest.
The exhibition match in the Saudi capital saw two of the greatest players of all time sharing a pitch together for possibly the final time.
Messi opened the scoring and Ronaldo netted twice for 2-2 at half-time.
Both players were substituted off just after the hour mark.
The two PSG centre-backs were also on the scoresheet as Sergio Ramos added to Marquinhos’ delightful finish in the opening period.
But the French side played much of the game with 10 men as Juan Bernat received a straight red card for hauling down Saudi international Salem Al Dawsari and Neymar also missed a penalty in a breathtaking first half.
Jang Hyun-soo’s header drew the All-Star XI level at 3-3, but Kylian Mbappe’s penalty and substitute Hugo Ekitike’s composed effort put PSG out of sight.
Anderson Talisca drilled in a long-range consolation late in injury-time but there was not time for a dramatic equaliser.
Source: BBC Sports