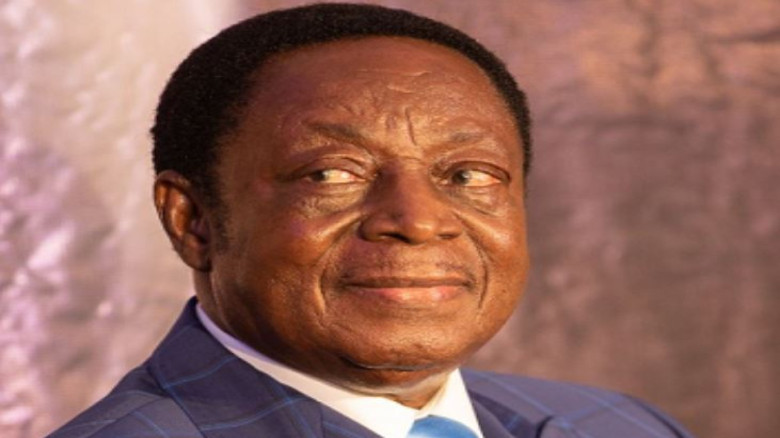 A group of former and current executives of the opposition National Democratic Congress (NDC) has stated their eager expectation of a tour that a 2024 flagbearership hopeful of the party, is preparing to embark on.
At a press conference in Tema, Stephen Ashitey Adjei, alias Moshake, declared the upcoming tour by Dr. Kwabena Duffuor, as the most important preoccupation of the party at the moment.
“For a long time we have heard the recycled promises that were never fulfilled when former President Mahama was leading the country. This is why all of us in Greater Accra are eagerly looking forward to hear the words of refreshment from Dr. Kwabena Duffuor” said Mr. Ashitey Adjei.
He added that, “when Dr. Duffuor comes around, he will have full attention of the party because we know where we are coming from”.
Dr. Duffuor is to embark on a tour of the country in the coming weeks. A verified Twitter handle of the former Finance Minister has since confirmed this upcoming tour.
“In the next few weeks, I will tour our great land and meet with my fellow brothers and sisters to speak about our issues, our lives, our needs and our dreams as citizens. I look forward to having those conversations and to explain what I mean by ‘The Ghanaian Dream’.”
Dr. Duffuor became a leading flagbearer hopeful of the NDC when he declared his intention to run for the 2024 presidential ticket of the NDC a couple of weeks ago.
Many  expect the former Finance Minister and former Governor of the Bank of Ghana to win the party’s 2024 presidential ticket and go on to win the presidential election because of the exigencies of the time.
Ghana is currently facing serious economic problems with inflation shooting through the roof. Many perceive that the Akufo-Addo government has lost control of the economy after crashing it and that what Ghana needs is a thoroughbred Economist to fix the economy.
This makes Dr. Duffuor, the perfect presidential material that Ghanaians would want to see in the saddle.
“When he becomes President, Dr. Kwabena Duffuor will hit the ground running with key policies to rescue the economy already in place”.
In another act of sale in favour of Dr. Kwabena Duffuor, Mr. Ashitey Adjei, alias Moshake, said another compelling argument why the NDC must reject Mahama for Dr. Duffuor so that Ghana’s broken economy can have its saviour.
“Many people do not know it but Dr. Duffuor has worked briefly at the International Monetary Fund (IMF) before as an economist in the African Department,” Moshake said.
He adds, “While there, in as far back as 1979, Dr. Duffuor submitted   a paper on “Exchange Rate Policy as part of a stabilization programme in Hyperinflationary situation, with special reference to Ghana” (African Department)”
“That paper contains solutions for the exchange rate troubles that are currently bedeviling our dear country.”
Consequently, according to him, “in regards to the pressing issue of the cedi’s continuous depreciation, Dr. Duffuor already has a policy document that can easily be reviewed, firmed up and implemented.
It is not now that after he is elected President, he is going to be racking his brain to come up with solutions on the way forward. A President Duffuor would already be clear on what to do to arrest the cedi’s depreciation – he already has a paper on how to arrest it with the IMF.”
Moshake’s take comes as the NDC slowly readies to elect its next presidential candidate for the 2024 elections, with Dr. Kwabena Duffuor’s intention to run for the ticket already declared and many expecting former President Mahama to also declare.
Commenting on the NDC’s upcoming presidential primary, Moshake reiterated calls on former president Mahama to “graciously step aside and make way for Dr. Duffuor to go unopposed.”
This according to Moshake is because, “Dr. Duffuor’s rich background and experience makes him the best material to lead Ghana at this time of debilitating economic crisis. With Mahama’s background as a communicator, he lacks the gravitas needed to be trusted with the economy.”
Moshake has also been arguing that Mr. Mahama’s baggage from his past administration which led to the NDC crushing out of power in 2016 and losing by over 500,000 votes in 2020 makes him a risky hand for the NDC to play in the 2024 elections even though the upcoming election is for the NDC to lose.
“In terms of economic intelligence, Dr. Duffuor is taller than Mr. Mahama, likewise popularity and political intelligence, Infact, the brilliant Dr. Duffuor’s pedigree is higher than that of the dead goat” Moshake said to thunderous applause from the gathering.