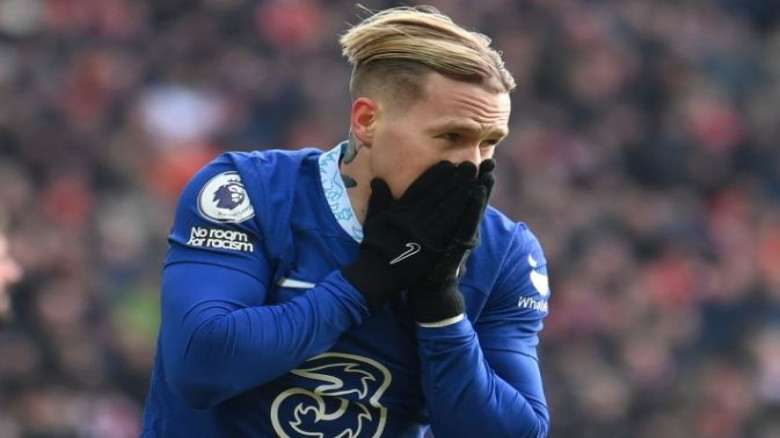 Liverpool and Chelsea laid their respective Premier League struggles bare for all to see in a bitterly disappointing stalemate at Anfield.
The two giants, who have been in constant pursuit of major prizes in recent seasons, are currently locked well outside the top four – and how it showed in a dismal game almost devoid of entertainment and quality.
Chelsea had an early Kai Havertz strike ruled out for offside by VAR and there was also a lively debut as a second-half substitute for £89m new boy Mykhailo Mudryk, while Liverpool keeper Alisson saved well from another new Chelsea signing, defender Benoit Badiashile.
Liverpool’s own £45m recruit Cody Gakpo was quiet – he did force one save from Kepa, but otherwise there was little to warm a capacity crowd at a freezing Anfield.
Liverpool lack intensity
The quality of this game was reflected in the subdued atmosphere at Anfield, with the final whistle greeted with near silence apart from some very mild applause.
Liverpool have made their reputation and based their success under manager Jurgen Klopp not simply on world-class talent but on a searing intensity that has seen teams simply blown away.
They currently look a shadow of that side in every respect – admittedly deprived of attacking talent such as Luis Diaz, Diogo Jota and Roberto Firmino – and there were very few alarms for Chelsea and no serious work for keeper Kepa.
“We had good spells but couldn’t keep it up,” Klopp told BT Sport.
“We have to be ready for little steps and this is a little step. A clean sheet against Chelsea, we didn’t create a lot of chances and they had some as well.
“In the end, I’m OK with 0-0 because you have to accept these steps. We can build on that.”
Liverpool’s new signing Gakpo seems to be in a settling in period, which is perfectly understandable, and he struggled to make an impact apart from one shot on the turn that brought a comfortable save from Kepa in front of The Kop.
Klopp’s side are now nine points off the Champions League places and it is clear they need to find that missing spark – and quickly – if they are to get anywhere near the top four.
Chelsea happier with draw
Chelsea’s new manager Graham Potter has had a tough start to life at Stamford Bridge, with poor results coming as the club continue to embark on a remarkable transfer spree.
And this is why Potter and Chelsea will take this point, even though they will know they had chances to make it three against a Liverpool defence that continues to look vulnerable, especially without Virgil van Dijk.