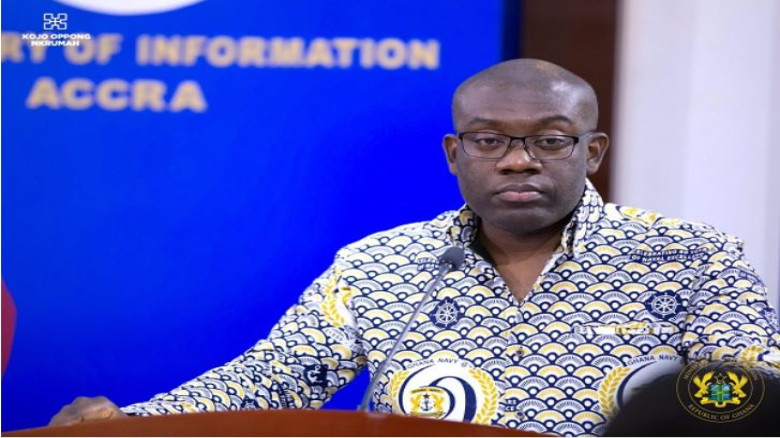 Minister for Information Kojo Oppong Nkrumah who is mired in scandal has been out of coverage area as the government struggles with its Domestic Debt Exchange.
This comes after the Minister himself is said to have questions to answer over an Auditor General’s Report regarding how his ministry allegedly squandered some Ghc151,500 as Covid allowances.
Before the scandal of self-payment under the guise of Covid-19 risk allowances, many Ghanaians have wondered the whereabouts of the Information Minister to explain the government’s Debt Exchange satisfactorily to Ghanaians.
Portions of the Auditor General’s report said the Management of the Information Ministry and its support staff who are not health workers paid themselves an amount of Ghc151,500 as risk allowance for going to work in the wake of COVID-19.
The Auditor General believes these monies need to be refunded by the Management and staff of the Information Ministry who were beneficiaries.
Kojo Oppong Nkrumah has since come under intense pressure on social media.
The Minister has instead left the job to Richard Ahiagbah, NPP Communications Director who himself is struggling.
Recently, Multimedia Current Affairs platform NewsFile rejected Richard Ahiagba as a guest to explain government positions on certain key questions.
A social media commentator of the opposition NDC one Abdul Hameed wrote:
“There’s no orator and spin doctor in the NPP better than Kojo Oppong-Nkrumah. Man could defend anything at the risk of sounding ridiculous but what are we seeing now? He has given up. He is overwhelmed.
“He is a potential presidential candidate and he has to salvage some of his lost credibility. He is not going to allow old men who are done with life to put hurdles in his budding political career. We all must learn from this.
When Kojo left journalism to enter politics, he received widespread support from politicians across the divide and civil society. He, together with other young people were seen as the accomplished fellows our politics need to be better. In the first 4 years of Akufo-Addo, many were disappointed with his availability to clean the government’s mess at all cost. In the second term, he has changed course.”