Manchester United inflicted a harsh lesson on Frank Lampard in his first Premier League assignment as Chelsea head coach with a 4-0 victory at Old Trafford on Renault Super Sunday.

Marcus Rashford opened United’s account from the penalty spot on 18 minutes, but Chelsea struck the woodwork twice through Tammy Abraham and Emerson Palmieri before the end of a promising first half.

Chelsea had more chances and more possession but a combination of wastefulness in front of goal and defensive errors cost them dear, as Anthony Martial doubled United’s lead and Rashford doubled his tally in the space of two second-half minutes.

Summer signing Daniel James came off the bench to complete the rout for Ole Gunnar Solskjaer’s side, who were guided to a first clean sheet of the season by assured performances from Harry Maguire and Aaron Wan-Bissaka on their Premier League debuts for the club.

How United ran riot against Chelsea

Speculation was rife ahead of kick-off as to how Lampard’s Chelsea’s would shape up, but by the time Abraham’s piledriver had struck the post inside four minutes there was complete and utter clarity – Chelsea were here to attack.

What wasn’t in the Chelsea game plan, though, was to undermine their positive start with defensive errors, with Kurt Zouma the main culprit as his stray pass across the box found Martial, who fired tamely at Kepa Arrizabalaga seven minutes in.

Zouma got away with his first lapse but his second was punished. After referee Anthony Taylor played a brilliant advantage after a foul on Andreas Pereira, the Frenchman needlessly brought Rashford down, presenting the United striker with a penalty which he dispatched ruthlessly into the top corner.

Chelsea pushed for an equaliser before the break as Ross Barkley’s low drive was saved by the legs of David de Gea. And when a defensive lapse between Victor Lindelof and Wan-Bissaka saw an aimless cross find Emerson in space at the back post, the woodwork came to United’s rescue for the second time as the full-back’s near-post drive cannoned off the bar.

Emerson stung De Gea’s palms early in the second half as Chelsea picked up from where they had left off in the first, but their challenge unravelled when raced with a rampant spell from United.

Martial was given all the time and space in the world to bundle United’s second home from Pereira’s whipped cross on 65 minutes, and two minutes later Paul Pogba’s exquisite pass released Rashford in behind for his second, which he calmly slotted away.

Pogba and Martial then linked up brilliantly to release James through on goal and the 21-year-old marked his Premier League debut with a clinical finish into the bottom corner that sealed a perfect start to the season for United and underlined the scale of the task in front of Lampard.

Manchester United manager Ole Gunnar Solskjaer told Sky Sports: “The second half was outstanding. We defended well in a shape and counter-attacked and were more composed on the ball. First half we hung in there and we were a bit lucky to go in at half-time 1-0 ahead.

“The fitter you are the more you can do. The boys are working hard, and this is just the start. The second half will give us loads of belief and confidence in the way we settled down and passed the ball around.”

Chelsea manager Frank Lampard told Sky Sports: “It was nowhere near a 4-0. Four mistakes for the goals, but we controlled major parts of the first half. We hit the woodwork, poor decisions in the final third, we should have been in the lead at half-time.

“There are loads of lessons for us. We are missing internationals and big players, but I don’t want to make excuses. The team we put out today was clearly competing in the game for long periods, but we made four mistakes and they were clinical in the way they put them away.”

Man of the Match – Harry Maguire 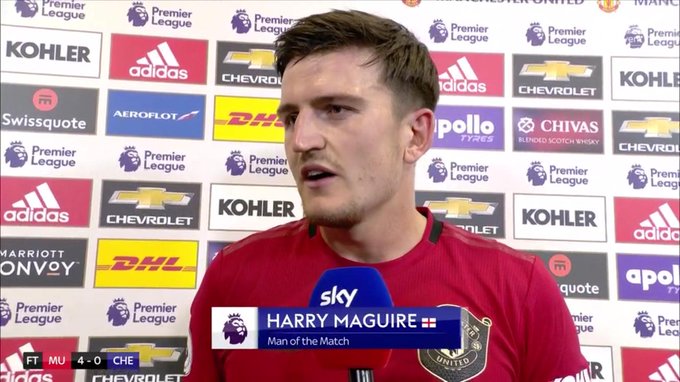 2,704 people are talking about this

All eyes were on Maguire to see how he would deal with the pressure of leading Manchester United’s defence and cope with the expectation of his £80m price tag, but he couldn’t have wished for a better debut. “He’s done exactly what we signed him for,” United boss Solskjaer said. “His presence in both boxes, his composure and calmness on the ball, and he is a leader.” It’s early days, but United’s latest signing looks worth every penny.

Five things we learned from the Premier League