The Western region has been Ghana’s lead cocoa producer since 1984 but roads leading into the cocoa farms could lead you to hell, Joy News’ Western regional correspondent Ina-Thalia Quansah has found out.

Thick mud makes mini tidal waves in the wide gullies sprawled along the 524.11kms of feeder roads in this district, adding another layer of needless adventure for the drivers who have to use this road to cart men and materials, pregnant women and farm produce.

Some 5,000 bags of cocoa beans were trapped in this district in 2017, the Daily Graphic has reported. It is the same as saying ¢2.37m was trapped there because of deplorable roads.

Joy News’ Western regional correspondent Ina-Thalia Quansah visited the district to listen to farmers and some of its over 106,800 residents recount several stories that all seem deja vu.

“It’s quite pathetic that we here vote but we don’t get anything from the government” she was told.

Ghana’s best comes from the west they say, but the government’s best just don’t go there. Only a fraction of its infrastructure is fit for purpose as 8.7 percent of roads in this district are tarred.

And so from Esuohyia to Samreboi, a journey of under one hour takes five frightening hours.

The Ghana Cocoa Board (COCOBOD) has been making investments in constructing roads in cocoa-growing areas.

Known as cocoa roads, funds are set aside each year to build roads that fit the economic potential of the region. 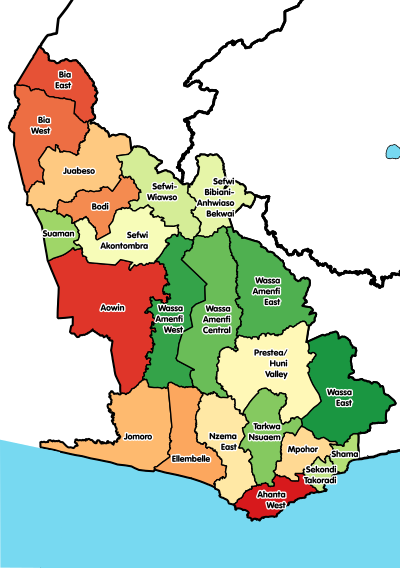 But these initiatives have been dogged by a mixture of politics and mismanagement. As at June 2017, works on the roads had been halted.

He said he came to office in Febuary 2017 to find out that former government had awarded contracts to the tune of ¢5.16 billion when it had budgeted ¢1.64 billion.

The claim was not without reply from the National Democratic Congress (NDC) which also accused the government of neglecting 230 cocoa roads and failing to earmark funds for its construction in the COCOBOD budget for 2017/2018.

The argument in Accra has been continuing.

But the farmers inside the Amenfi West district keep wondering how providence has given them the best climate to grow cocoa, and why they give off their best to cultivate it and yet government cannot seem to get its act together to build roads.