Demonstrators have gathered at Hong Kong’s airport, marking the start of three days of unauthorised rallies in the Chinese territory.

Protests have gripped Hong Kong for weeks, beginning with anger at an extradition bill and morphing into demands for greater freedoms.

The former British colony is part of China but enjoys more autonomy.

It has a free press and judicial independence under the “one country, two systems” approach – freedoms activists fear are being increasingly eroded.

They have called for an independent inquiry into alleged police brutality during the protests, the complete withdrawal of the controversial extradition bill, and the resignation of Hong Kong’s leader Carrie Lam.

At a press conference on Friday, Ms Lam spoke of the economic impact of the protests after meeting with business leaders. She called on people to stop taking part in protests and for an end to the violence.

“We should put different opinions aside so that Hong Kong society won’t be hurt further,” she said.

Beijing earlier this week warned demonstrators not to “play with fire” or to “underestimate the firm resolve [of] the central government”.

What’s happening at the airport?

Demonstrators plan to stay at the airport throughout the weekend.

They are waving banners written in different languages denouncing Carrie Lam and the police, and handing out leaflets with artwork explaining the recent protests.

Pamphlets being given to passengers arriving at #HongKong Airport… 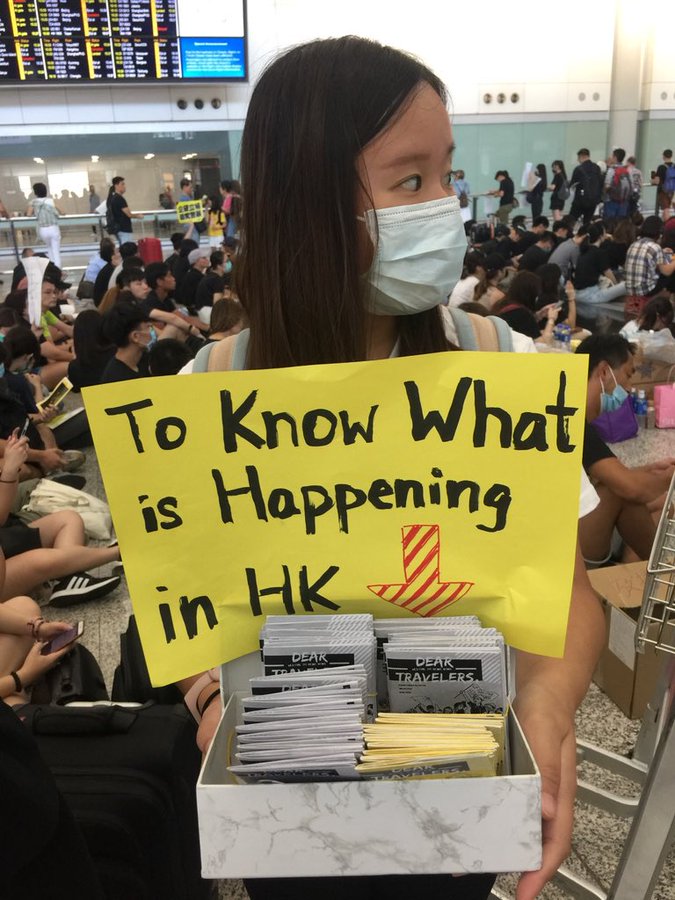 32 people are talking about this
Report

Authorities are so far tolerating the peaceful rally, which have not overly disrupted passengers. There are as yet no police at the scene.

“It will be a peaceful protest as long as the police do not show up,” one demonstrator told Reuters news agency.

Hong Kong’s Airport Authority said it would “operate normally” despite the planned demonstrations.

A demonstration at the airport on 26 July with thousands of Hong Kongers – including flight staff – took place without violence.

On Thursday, the US became the latest country to issue a travel warning for the territory.

It came on the same day a state department spokeswoman denounced China as a “thuggish regime” after a state newspaper published the name and photo of a US diplomat allegedly talking to activists.

“That is not how a responsible nation would behave,” Morgan Ortagus told reporters.

How are the authorities reacting?

Ms Lam met with business leaders on Friday about the economic impact of the protests.

“We’ve experience SARS and financial crises,” Ms Lam told reporters after the meeting, referring to the respiratory disease epidemic in 2003. “This time is more serious.”

Property developers in the territory had earlier warned that demonstrations were damaging Hong Kong’s economy.

“Hong Kong cannot be in chaos. I believe this is the heartfelt opinion of all Hong Kongers,” she said. “We don’t want such a cherished place to become like this.”

She also announced the Hong Kong government would reconvene a week earlier than planned from summer recess on 13 August.

“If you are unsatisfied with the Hong Kong government that does not mean you should condone the violence,” she said. “We hope to do our work better.”

Earlier on Friday, authorities confirmed that former deputy police commissioner Alan Lau has been brought out of retirement to help handle protests in the territory.

Beijing has issued increasingly stern warnings about the continuing demonstrations, and the military recently released a video showing them conducting anti-riot drills.